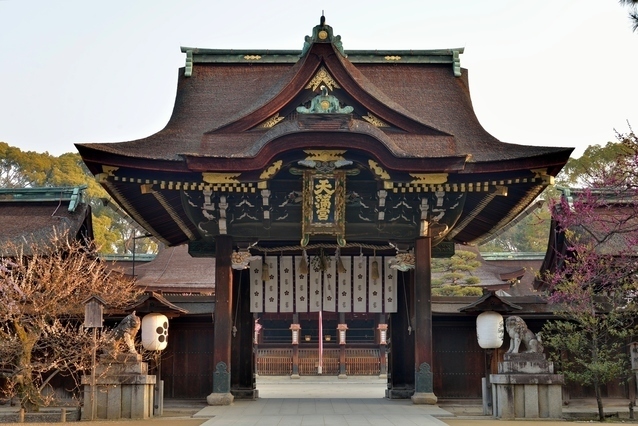 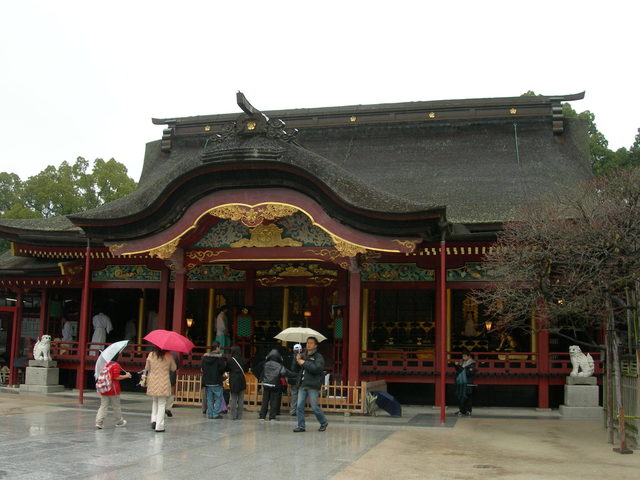 Michizane was a talented scholar and he rise to Udaijin[右大臣（うだいじん）] which was the third governmental post in the court although this position was above his family rank.

But he was relegated to the head of Dazaifu[大宰府](That was the administrative center of Kyūshū Region) by a false rumor that he planned to let Emperor Daigo[醍醐天皇（だいごてんのう）] abdicate. This rumor is said to have been spread by Fujiwara no Tokihira[藤原時平（ふじわらのときひら）] who was the then Sadaijin[左大臣（さだいじん）] which was the second governmental post in the court.

Michizane died with disappointment in Dazaifu in 903, two years after his demotion. 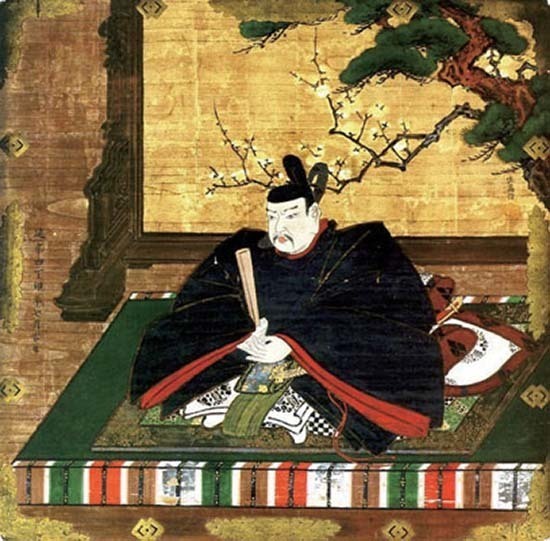 His body was carried to bury by a cow carriage but the cow stopped on the way. People thought that Michizane wanted to stay and buried his body there.

After that, the mausoleum was built on his tomb in 905. Meanwhile the capital, Kyoto suffered from the abnormal weather and plague. And Sadaijin, Fujiwara no Tokihira died at 39 in 909. People thought these ominous incidents were due to the ghost of Michizane who had a grudge.

As a result, the shrine enshrined Michizane as the god was built by the order of Emperor Daigo in the place he rested in 919. This is the beginning of Dazaifu Tenmangū. 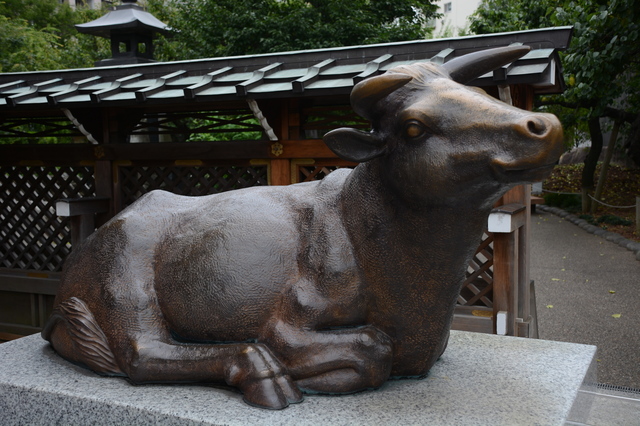 Statue of cow at Yushima Tenmangū: In many Tenmangū, there is a statue of cow because there are some stories of cow related to Michizane and it is thought that cow is the messenger of Tenjin.

But the ominous things continued. An emperor's son, Crown Prince Ysuakira[保明親王（やすあきらしんのう）] died in 923 and Prince Yoshiyori[慶頼王（よしよりおう）], who was a Yasuakira's son and became the crown prince after his death, died at 5 in 925.

And in 930, the decisive incident happened. In the imperial residence, the conference against the drought of the year was held and lightning struck there. The residence was burned down and there were some casualties. Emperor Daigo was shocked and died three months after the incident. In 947, Kitano Tenmangū was built to console Michizane's soul.

This story is drawn in Kitano Tenjin Engi-emaki[北野天神縁起絵巻（きたのてんじんえんぎえまき）].

Michizane was an excellent scholar. So, students visit Tenmangū to worship Tenjin as the god of study. 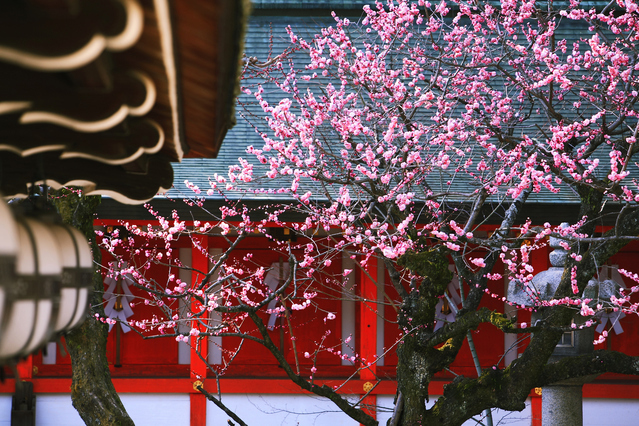 He loved Ume blossoms and therefore, that is a symbol of Tenmangū Shrines and Ume trees are planted in many of them. Especially, in Dazaifu Tenmangū, there is a famous Ume tree, "Tobi-ume[飛梅（とびうめ）]". This tree has a legend that it came from Kyoto to Dazaifu in one night when Michizane relegated to Dazaifu. 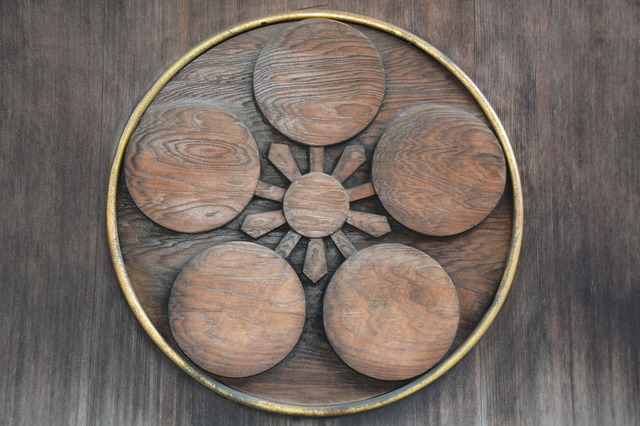 The symbol of Ume at Yushima Tenmangū 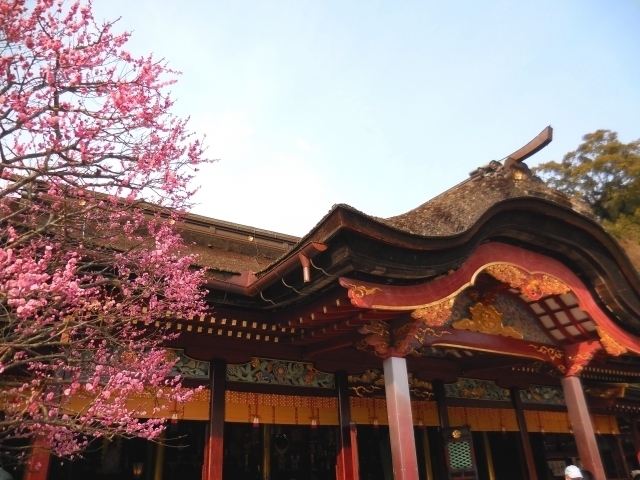 And Umegae-mochi[梅ヶ枝餅（うめがえもち）] is a specialty of Dazaifu and it is sold in shops along the way to the shirne. That is a Mochi[餅（もち）] on which a pattern of Ume is stamped. 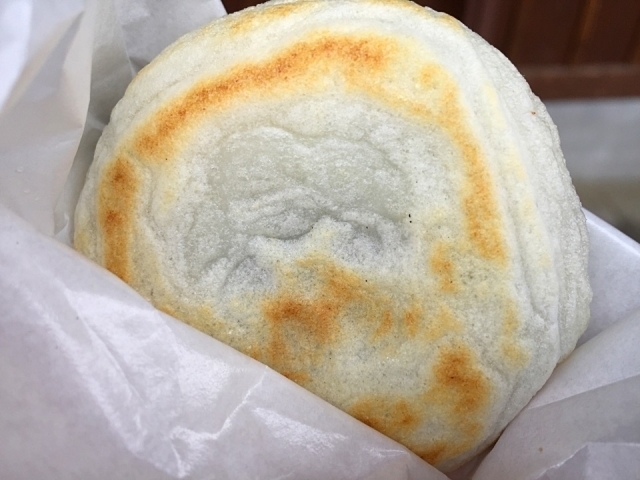