スマートフォン専用ページを表示
Sōmen[素麺（そうめん）] is a thin noodle made from wheat flour. Most of them are mainly sold as dried noodle. 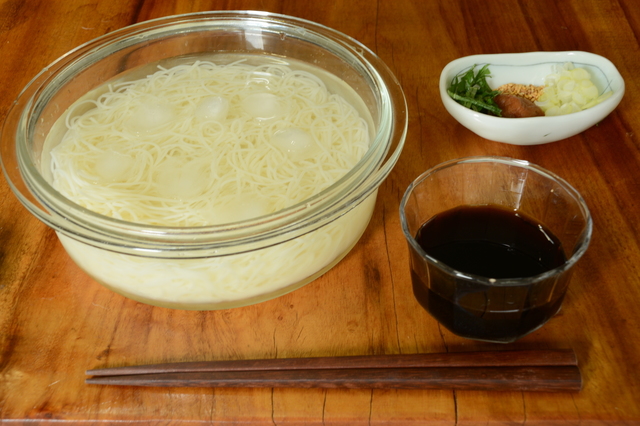 Apart from this standard, vegetable oil is use as an ingredient in Sōmen and Hiyamugi but not use in Udon. Siroishi-ūmen[白石温麺（しろいしうーめん）], which is a local noodle in Shiroishi City, Miyagi, is classified as a Sōmen according to the size but oil is not used in it like Udon. 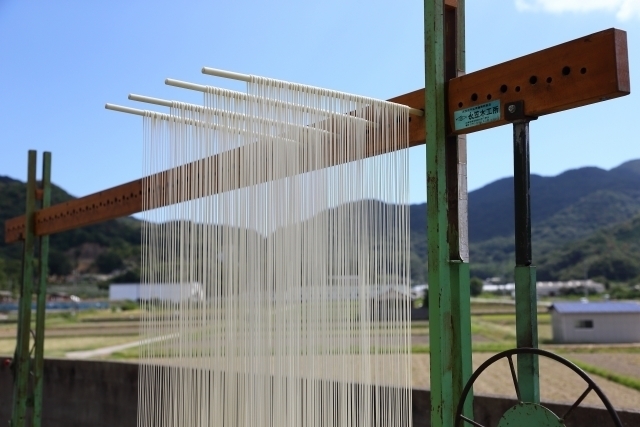 Sōmen is mainly cooled in cold water after boiled and served with Tsuyu[つゆ](soup) for dipping and Yakumi[薬味（やくみ）](condiments) such as chopped Naga-negi[長葱（ナガネギ）](long green onion), Ume-boshi[梅干し（うめぼし）](pickled Ume) and chopped green Shiso[紫蘇（しそ）] leaf. Sōmen is a popular summer food because it is eaten as a cold food and tastes light. Therefore, it is the best food for muggy summer in Japan.

The most common Tsuyu is made from soy sauce, dried bonito, Mirin[味醂（みりん）](sweet sake), etc. but that added sesame paste is also popular.

Nagashi-sōmen[流しそうめん] is a unique way to eat Sōmen. That is to catch and eat Sōmen in flowing water. In the typical Nagashi-sōmen, bamboo cut lengthwise is often used as a slide for flowing Sōmen. In this case, Nagashi-sōmen is mainly held outdoors. 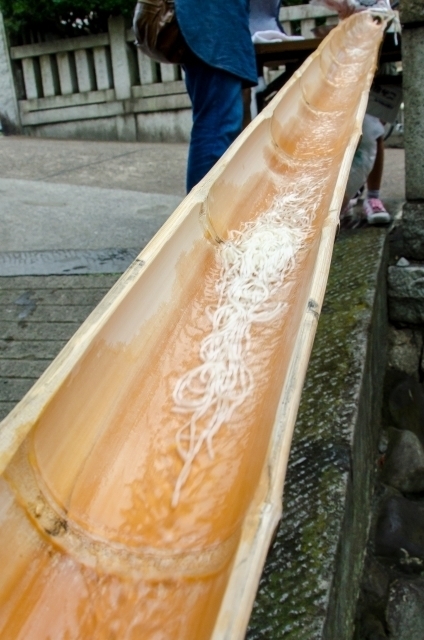 Other than cold Sōmen, there are some Sōmen dishes such as Nyūmen[にゅうめん](Sōmen in hot soup) and Sōmin-champurū[ソーミンチャンプルー]. Sōmin-champurū is a local food in Okinawa which is a stir-fried Sōmen with ingredients. Besides them, a dish of raw squid cut like Sōmen is called "Ika-sōmen[イカそうめん]" which is eaten dipped in Tsuyu or soy sauce.


Sōmen production is active in the western Japan and some of them are famous as local specialties such as Miwa-sōmen[三輪素麺（みわそうめん）](Sakurai City, Nara), Handa-sōmen[半田素麺（はんだそうめん）](Tsurugi Town, Tokushima) and Shimabara-sōmen[島原素麺（しまばらそうめん）](Shimabara City, Nagasaki). And Shōdo-shima Island[小豆島（しょうどしま）] in Kagawa Prefecture is also a famous production area of that.

Among Sōmen brands, Ibo no Ito[揖保乃糸（いぼのいと）] is the most famous and popular. That is a Tenobe-sōmen made in the southwestern area of Hyōgo Prefecture. Sōmens of Ibo no Ito are graded by differences in material and process. High grade Sōmen is often used as a seasonal gift. 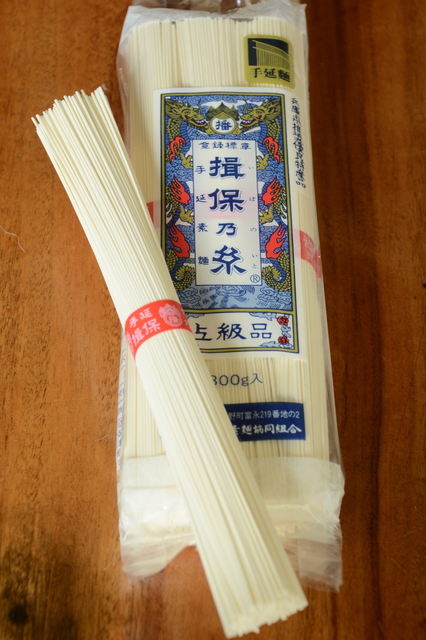