スマートフォン専用ページを表示
Kinkaku-ji[金閣寺（きんかくじ）](Temple of the Golden Pavilion) is a temple of Rinzai School[臨済宗（りんざいしゅう）](One of the Zen sect of Buddhism) in Kyoto.

This is a popular name and it is so called because of the most famous building of the temple, "Kinkaku[金閣](Golden Pavilion)" which is a Shariden[舎利殿（しゃりでん）]( Shariden is the building for storing the relics of Buddha.). Kinkaku-ji is officially called "Rokuon-ji[鹿苑寺（ろくおんじ）]". 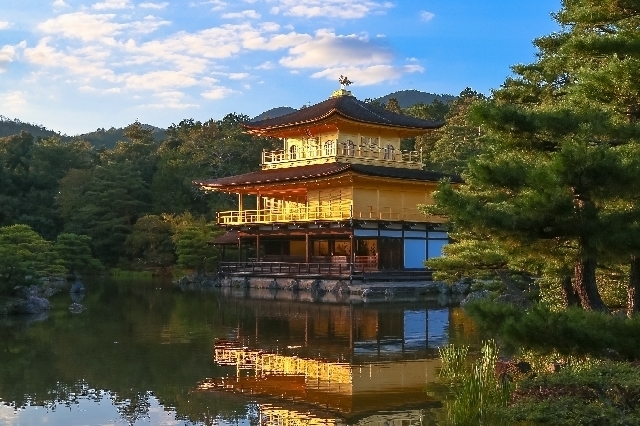 It is said that the land of Kinkaku-ji was originally the villa of a court noble, Kintsune Saionji(Fujiwara[西園寺 (藤原)公経（さいおんじ(ふじわら)きんつね）] and it was succeeded to the third shogunate of the Muromachi Period(1336-1573), Yoshimitsu Ashikaga[足利義満（あしかがよしみつ）] and he built his villa "Kitayama-dono[北山殿（きたやまどの）]". This is the origin of Kinkaku-ji.

From this, the culture of the period of Yoshimitsu(1358-1408) is called "Kitayama Bunka[北山文化（きたやまぶんか）](Kitayama Culture)". In this period, the court culture was fused with the Samurai and Zen culture. In addition, that was influenced by Chinese culture due to the trade of Ming[明](a dynasty of China). And Kinkaku is the representative building of Kitayama Bunka.


In Kitayama-dono, it is said that some buildings were built other than Kinkaku. But after Yoshimitsu's death, those were demolished except Kinkaku and Kitayama-dono was converted into a Zen temple by his will.

The temple was named "Rokuon-ji" after his posthumous Buddhist name "Rokuon'in[鹿苑院（ろくおんいん）]". 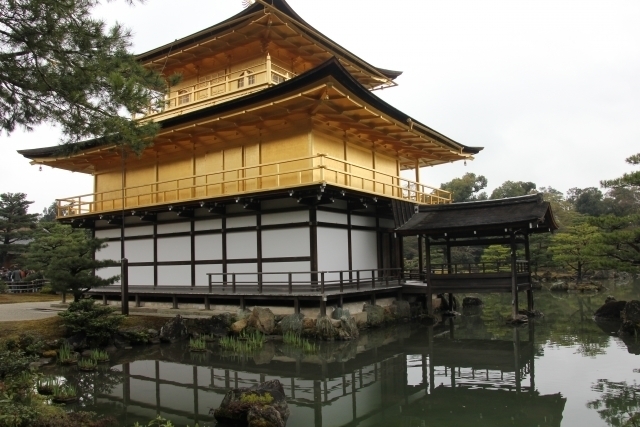 The first floor, named "Hōsuiin[法水院（ほうすいいん）]", was built in the Shinden-zukuri[寝殿造り（しんでんづくり）] which is the residence style of the court noble in the Heian Period(794-1185). The Buddha statue called "Hōkan Shaka-nyorai[宝冠釈迦如来（ほうかんしゃかにょらい）]" and the statue of Yoshimitsu are enshrined at Hōsuiin.

The third floor "Kukkyōchō[究竟頂（くっきょうちょう）]" was built in the Zen temple style characterized by such as windows shaped like a bell which is called "Katō-mado[花頭窓（かとうまど）]". Kukkyōchō is the floor of storing the relics of Buddha(Busshari[仏舎利（ぶっしゃり）]). 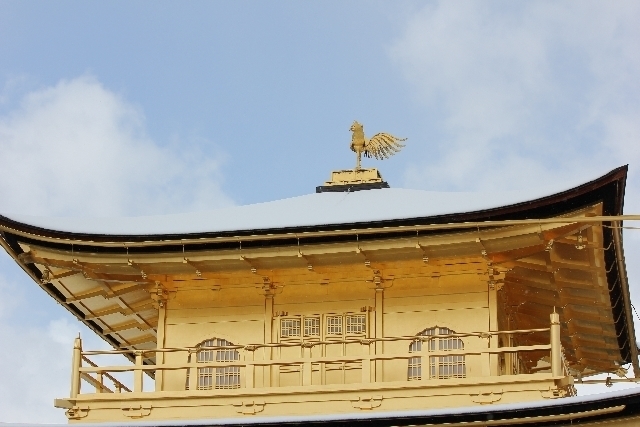 The roof is thatched with shingles of a kind of cypress, Sawara[椹（さわら）] and golden Hōō[鳳凰（ほうおう）](phoenix) statue is installed on the top. 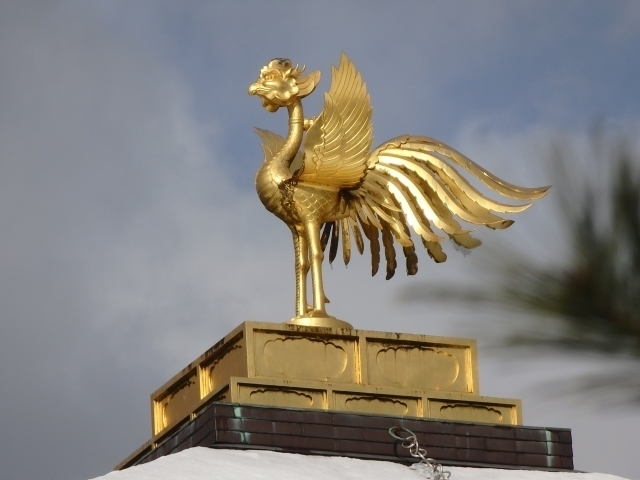 Kinkaku had been designated as the National Treasure but in 1950, Kinkaku burned down due to arson by a young monk of Kinkaku-ji.

Yukio Mishima[三島由紀夫（みしまゆきお）] wrote a novel "Kinkaku-ji(The Temple of the Golden Pavilion)" based on this monk and incident. This is famous as one of his masterpieces and Mishima describes ambivalent sentiments of the monk and contrast of his notions such as real beauty and ideal beauty, mortality and immortality, right and evil in the refined style. 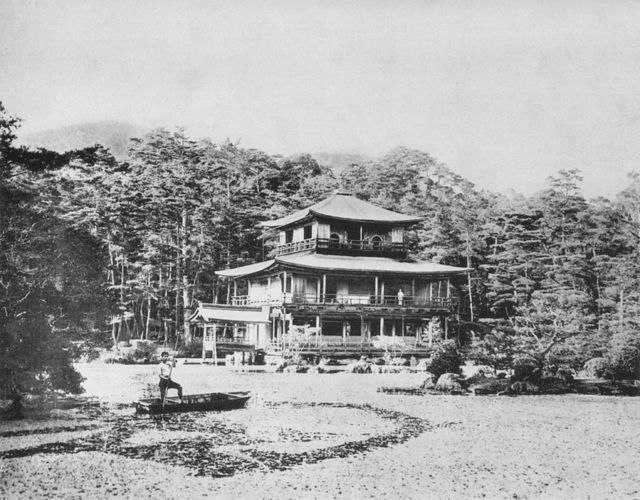 The present Kinkaku building was rebuilt in 1955. The former Kinkaku had mostly lost the golden leaf but it was rebuilt as the brilliant figure when it had been built.

It is not allowed to enter Kinkaku now. But Kinkaku is fascinating in all seasons, with cherry blossoms in spring, greenery in summer, colored leaves in autumn, snow in winter. 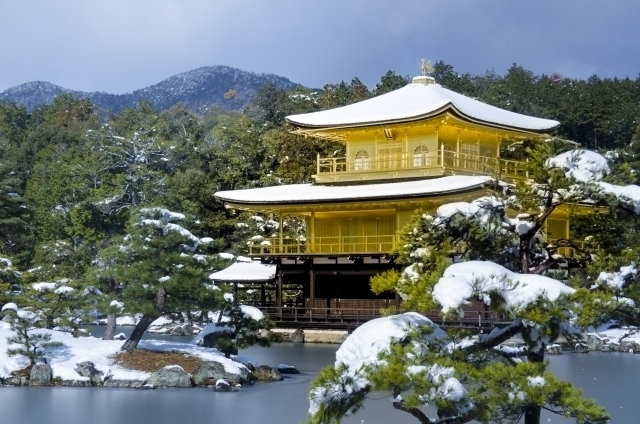 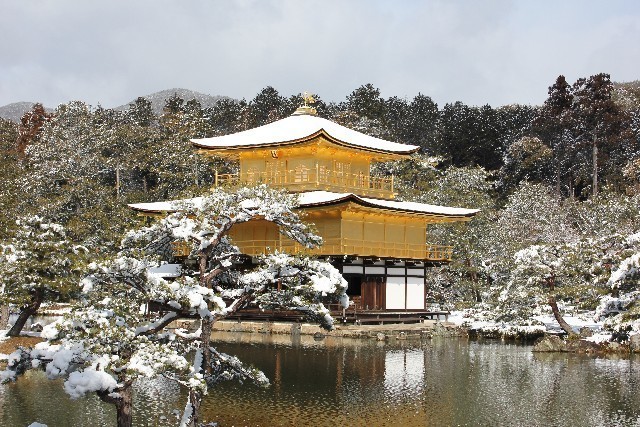 Kinkaku-ji has some buildings other than Kinkaku such as Hōjyō[方丈（ほうじょう）](main hall) and Dai-shoin[大書院（だいしょいん）](large study hall).

Sekka-tei[夕佳亭（せっかてい）] is the tea house which is located on the higher place and you can look down Kinkaku. When Kinkaku is it up by setting sun, the view from that is beautiful. 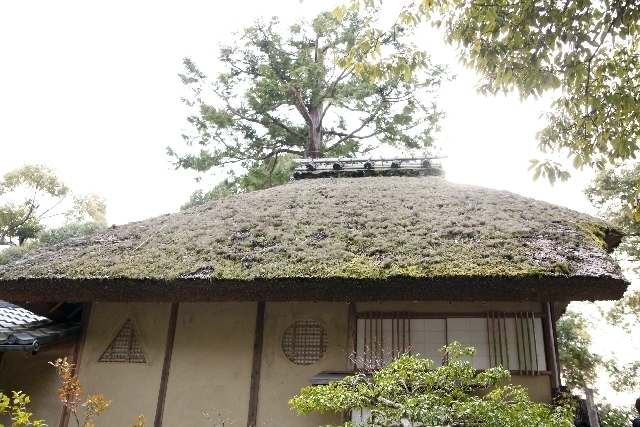 The garden of Kinkaku-ji is a Chisen-kaiyū-shiki Teien[池泉回遊式庭園（ちせんかいゆうしきていえん）] which is a style of Japanese garden designed for strolling around a pond. In A pond "Kyōko-chi[鏡湖池（きょうこち）]" which surrounds Kinkaku, the odd rocks and isles are placed and that is beautiful. And You can enjoy Kinkaku over the pond and the reflection on that. This garden is designated as National Special Historical Site and Special Place of Scenic Beauty. 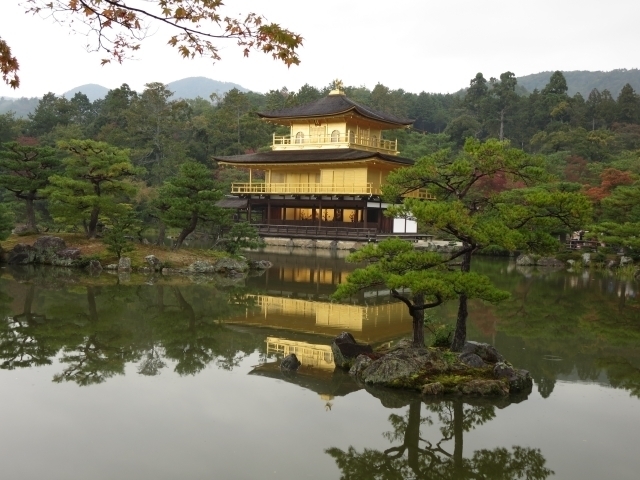 In 1994, Kinkaku-ji was registered as a UNESCO World Heritage Site as one of the Historic Monuments of Ancient Kyoto.