スマートフォン専用ページを表示
Kamikōchi[上高地（かみこうち）] is a scenic mountainous area located at about 1500 m a.s.l. in Matsumoto[松本（まつもと）] City, Nagano Prefecture. That is a basin surrounded by Hida Mountains[飛騨山脈（ひださんみゃく）] over 2000m.

Hida Mountains is also called "Northern Alps" and that constitutes a part of Japan Alps[日本アルプス] with Kiso Mountains[木曽山脈（きそさんみゃく）](Central Alps) and Akaishi Mountains[赤石山脈（あかいしさんみゃく）](Southern Alps). 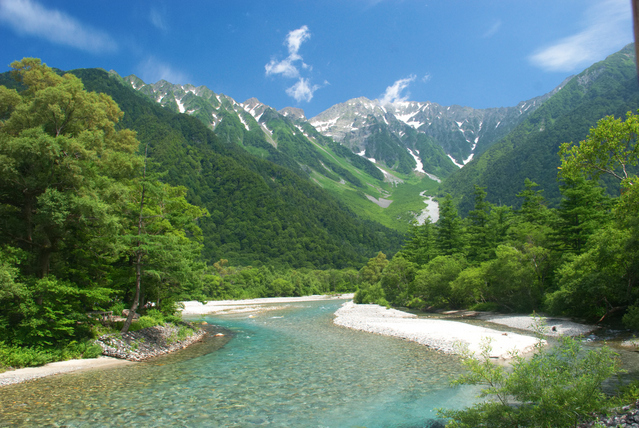 In the Edo Period(1603-1868), Kamikōchi was used as a logging area by Matsumoto Domain and that was little known to the public.

In 1896, Kamikōchi and Japan Alps was introduced by the book written by an English missionary, Walter Weston.

Until then, mountain had mainly been an object of worship and people had climbed the mountain for the purpose of that. But Weston introduced Japan Alps as an object of leisure climbing and Kamikōchi as a scenic spot. Owing to him, Kamikōchi has developed as an entrance to Northern Alps, a scenic spot and a mountainous resort.

Kamikōchi is one of the best scenic spot in Japan. There are many beautiful spots there. Especially, from Kappa Bridge[河童橋（かっぱばし）] across Azusa-gawa River[梓川（あずさがわ）] through Kamikōchi, you can enjoy the magnificent view of Mt. Hotaka[穂高岳（ほだかだけ）](3,190m) with its huge cirque and you can also view Mt. Yake-dake[焼岳（やけだけ）](2455m) from the opposite side of Mt. Hotaka.

Kappa Bridge is also known as a set of "Kappa[河童]" by a Japanese novelist, Ryūnosuke Akutagawa[芥川龍之介（あくたがわりゅうのすけ）](Kappa is a fabulous monster.).

The bridge is located in the center of Kamikōchi. Therefore, there are hotels, shops and visitor center in the area. 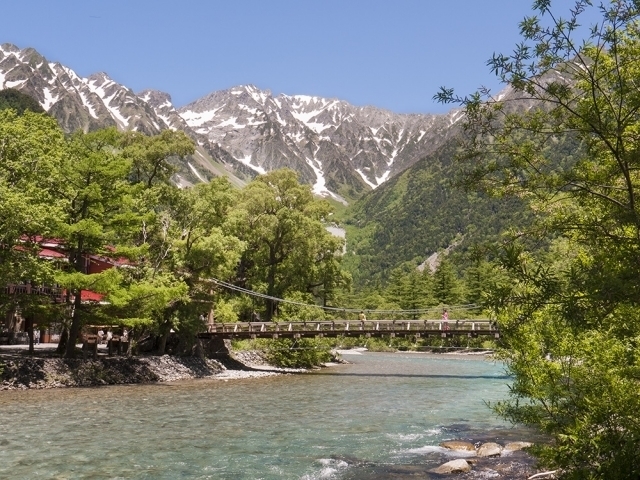 Taishō Pond[大正池（たいしょういけ）] is also famous and beautiful spot. The pond was created by the damming up of Azusa-gawa due to an eruption of Mt. Yake-dake in 1915(Taishō[大正] is a Japanese era from 1912 to 1926.). Dead trees stand in the pond and reflect fantastically on the surface of clear water. 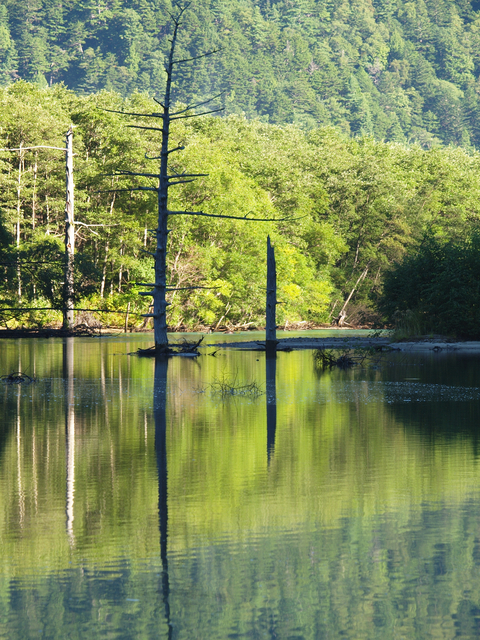 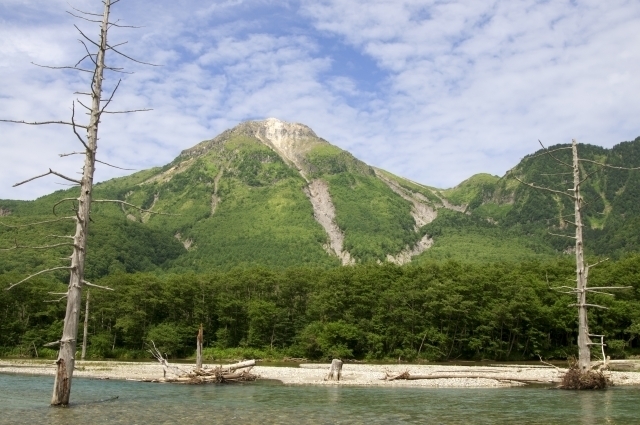 Other than the pond, there are some ponds such as Myōjin Pond[明神池（みょうじんいけ）] and Tashiro Pond[田代池（たしろいけ）], marshlands and small tributaries of Azusa-gawa. And the promenades through them are surrounded by forest and they are very relaxing. 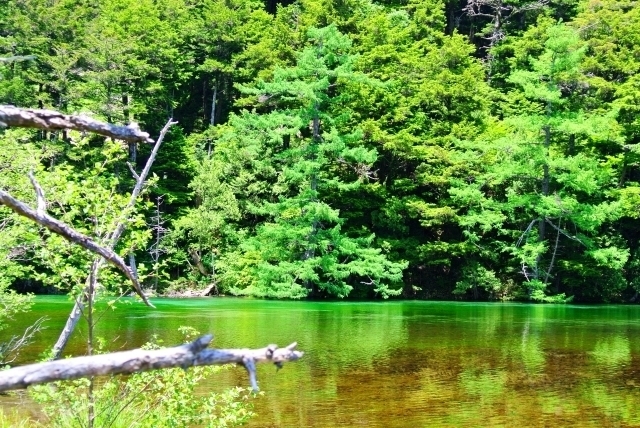 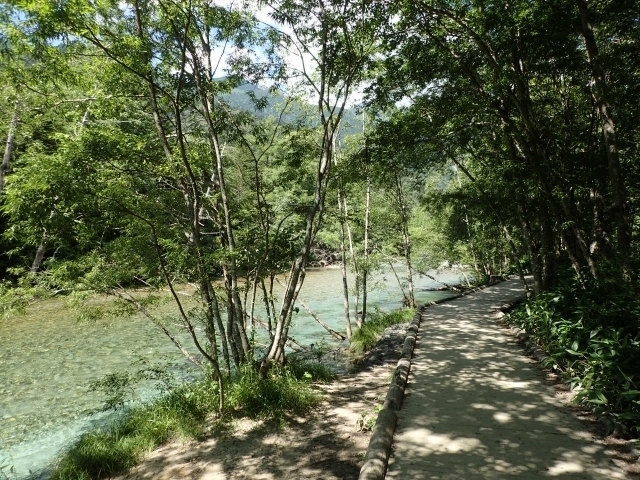 Kamikōchi is also a starting point for climbing the mountains such as Mt. Hotaka and Mt. Yarigatake[槍ヶ岳（やりがたけ）](3,180m). Especially, the trail to Karasawa Cirque[涸沢（からさわ）カール] on Mt. Hotaka is popular. In summer, the cirque is covered with colorful alpine plants and much snow remains. In autumn, it is known as a famous spot of autumn leaves. 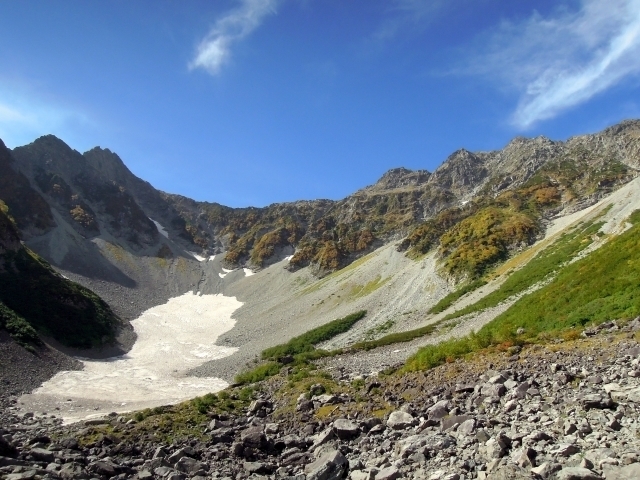 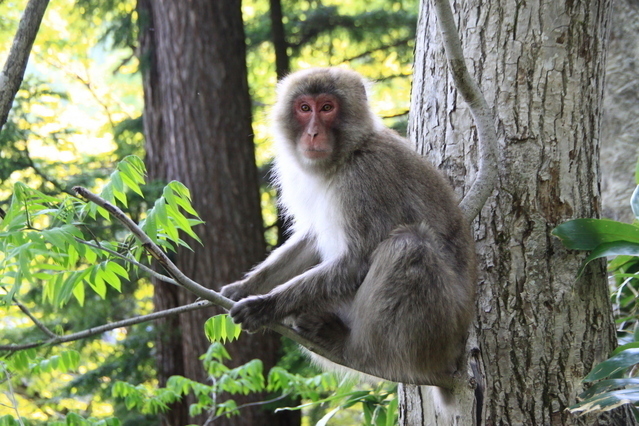 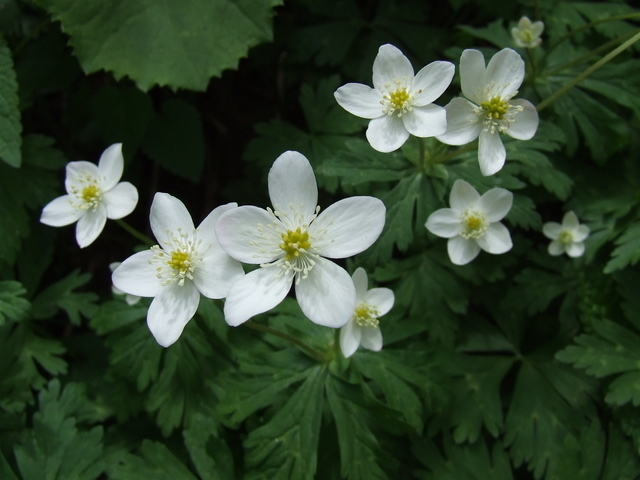 Private motor vehicles are prohibited to enter the road leading to Kamikōchi in order to preserve the environment and you have to transfer to the bus or taxi. But the buses bound for Kamikōchi are operated from Matsumoto and also Shinjyuku, Tokyo.


Kamikōchi has been designated as a Special Place of Scenic Beauty and a Special Natural Monument.