スマートフォン専用ページを表示
Climbing Mt. Fuji[富士山（ふじさん）] began as a training of Shugen-dō[修験道（しゅげんどう）](a religion mixed Shinto & Buddhism). In the Edo Period(1603-1868), climbing for worship that is called "Fuji-kō[富士講（ふじこう）]" spread among common people. But at that time, women were being prohibited from climbing Mt. Fuji. So, for people who couldn't climb the mountain such as women, the sick & the aged, Miniature Mt. Fujis were built with using lava from Mt. Fuji in the sites of shrines around Kantō Region. That is called "Fuji-zuka[富士塚（ふじづか）]". Women were finally permitted to climb Mt. Fuji in the Meiji Period(1868-1912). Recently, many climbers visit Mt. Fuji because that was registered as World Heritage Site 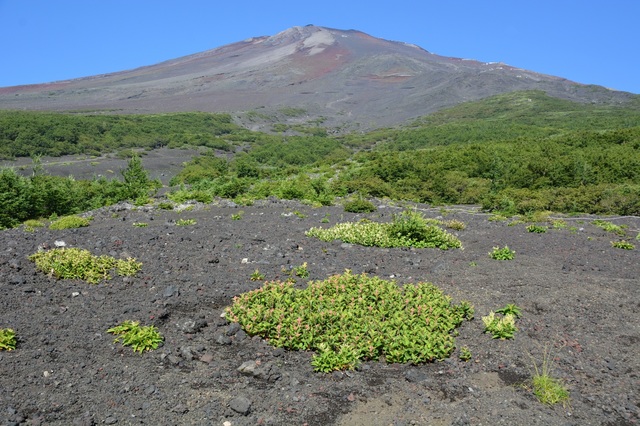 To say the truth, I think Mt. Fuji is more suitable for viewing than climbing. Because most of the trails are rocky & monotonous and Alpine plants are not seen very much. If you enjoy climbing, there are many mountains more suitable for climbing in Japan. For example, Mt. Taisetsu[大雪山（たいせつざん）] in Hokkaidō, Mt. Gassan[月山（がっさん）] in Yamagata, Alps in Chūbu Region, Mt. Hakusan[白山（はくさん）] in Ishikawa.

But many Japanese want to climb Mt. Fuji once in their lives. Mt. Fuji is a sacred mountain and above all, it's the highest mountain in Japan. You must achieve a sense of accomplishment, if you climb that. And seeing the sunrise that is called "Goraikō[ご来光（ごらいこう）]" at the top of Mt. Fuji is very popular and you'll be impressed and enjoy special experience.


Climbing season of Mt. Fuji is from early July to early September. You can also climb that in other period but huts & toilets are closed and the temperature drops, so I don't recommend.

There are 4 trails to the top of Mt. Fuji, Yosida[吉田（よしだ）] Trail, Fujinomiya[富士宮（ふじのみや）] Trail, Subashiri[須走（すばしり）] Trail, Gotenba[御殿場（ごてんば）] Trail. Even shortest route in the case of ordinary people, it takes over 8 hours to climb and you need to prepare for that. There are restrictions for cars from the foot to start points except Gotenba Trail in most of climbing season. So, if you go by car, you must park your car in the parking of the foot and use shuttle bus or taxi.


The details of trails are as follows.

・Yoshida Trail(North side, Ascend: 6-7.5 hours, Descend: 3-4 hours, Total length: 13.8km)
It's a trail starting from the 5th station(2,305m) of Fuji-Subaru Line[富士スバルライン]. It's only a trail on Yamanashi Prefecture side. There is a direct bus from Tokyo to the starting point and it's the easiest to access. And Yoshida Trail has the most huts and more than half climber choice the trail. So, it is said it's for beginners. But it's a crowded trail because of its popularity. The trail leads to the top in front of Kusushi Shrine[久須志神社（くすしじんじゃ）]. 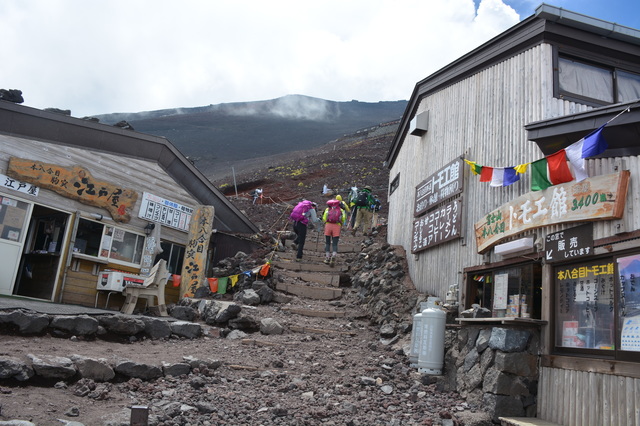 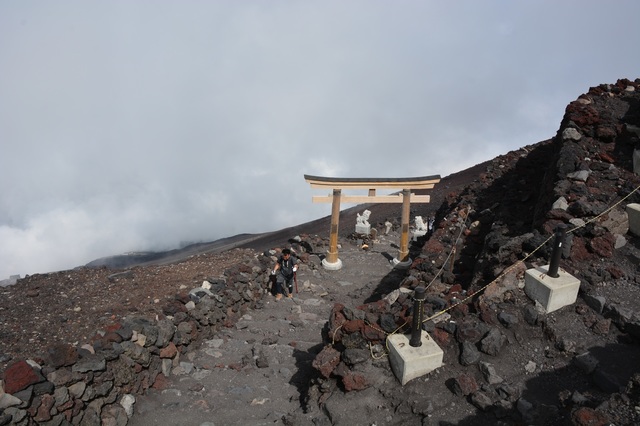 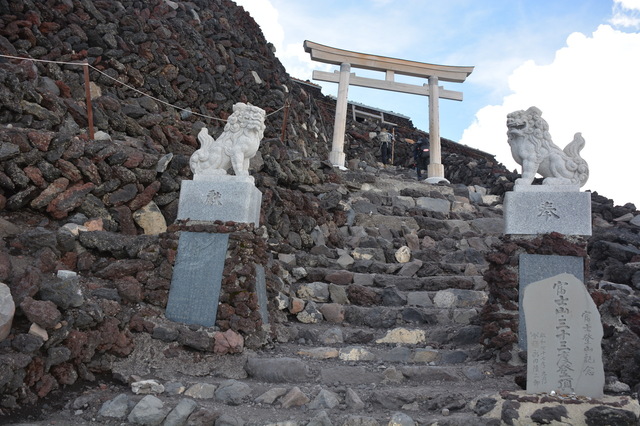 The top of Yoshida, Subashiri Trail

・Fujinomiya Trail(South side, Ascend: 5.5-6 hours, Descend: 3.5-4 hours, Total length: 8.7km)
It's a trail starting from the 5th station(2,390m) of Fujinomiya-guchi on Fujisan Skyline[富士山スカイライン]. Its starting point is the highest out of 4 and the trail is the shortest route to the top of the mountain. But it's steep & rocky. And the trail for ascent is the same as the trail for descend. So, you need to be careful to pass someone. It's a climbing route from sea side and you can see Suruga Bay[駿河湾（するがわん）] and Izu Peninsula[伊豆半島（いずはんとう）]. The trail leads to the top in front of Fujisan Chōjyō Sengen Taisya Okumiya Shrine[富士山頂上浅間大社奥宮（ふじさんちょうじょうせんげんたいしゃおくみや）]. 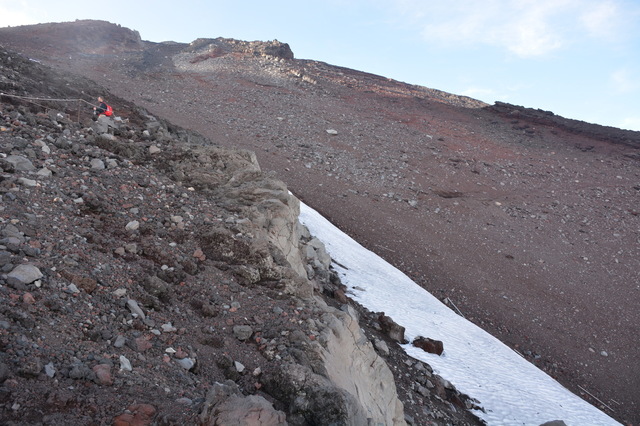 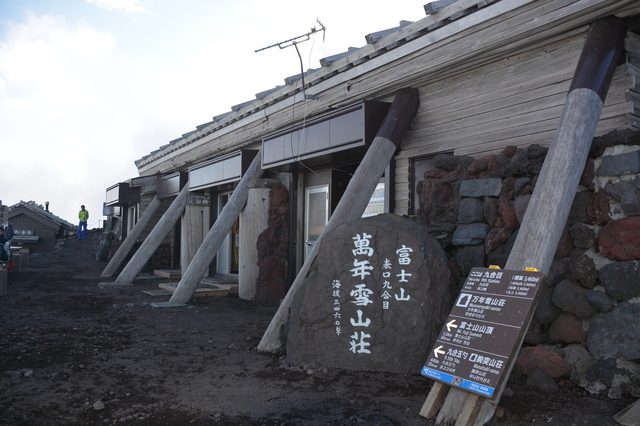 ・Subashir Trail(East side, Ascend: 7-8 hours, Descend: 3.5 hours, Total length: 12.9km)
It's a trail starting from the 5th station(1,970m) of Subashiri-guchi on Fuji-Azami Line[ふじあざみライン]. It takes long time to climb up because of the starting point is lower than former 2. But because of it, you can walk in the forest and see Alpine plants. Subashiri Trail joins Yoshida Trail at the old 8th station. The down trail passes volcanic ash zone called "Suna-bashiri[砂走り（すなばしり）]" and you can climb down straight here. So, it doesn't take much time to climb down. 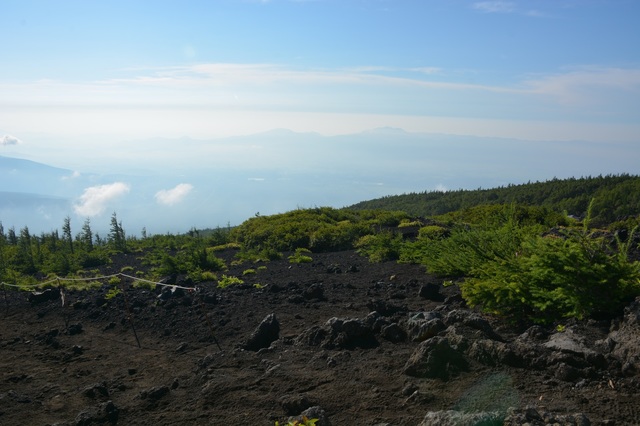 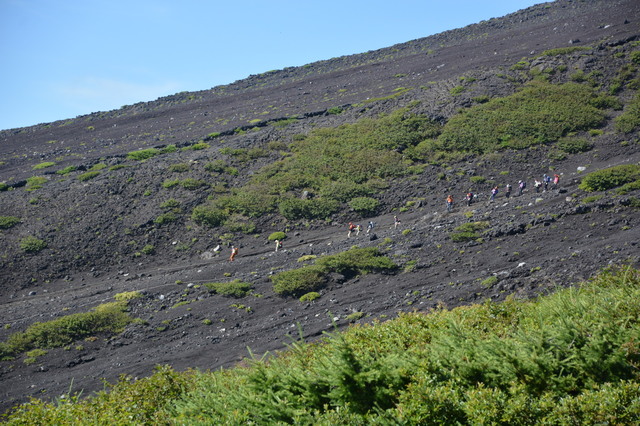 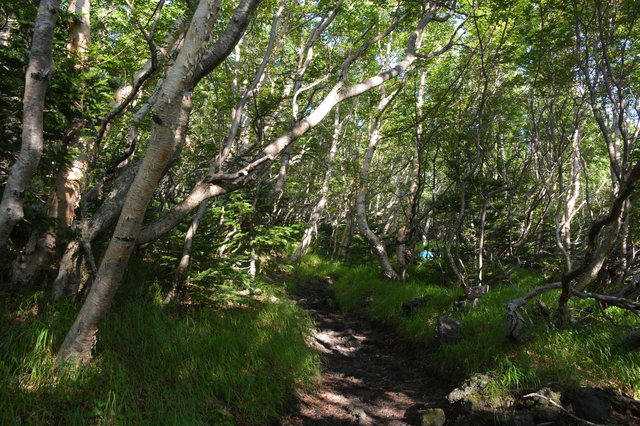 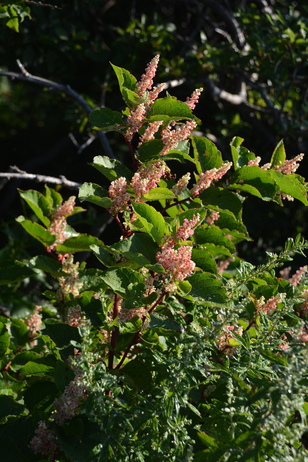 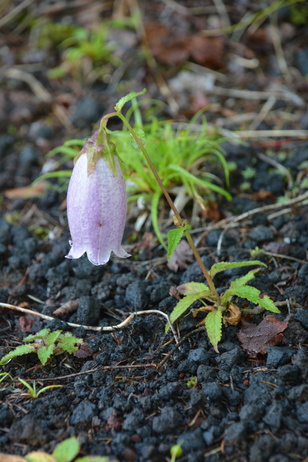 ・Gotenba Trail(South-east side, Ascend: 8-9 hours, Descend: 4-4.5 hours, Total length: 17.4m)
It's a trail starting from the 5th station(1,440m) of New Gotenba-guchi. Its starting point is the lowest and it's the longest trail to the top. And there are not huts much. So it's for advanced climbers. There are few climber and you can climb quietly.


Climbing with a wooden stick called "Kongō-zue[金剛杖（こんごうづえ）]"(that is sold in hut or souvenir shop), it's one of the way to enjoy climbing Mt. Fuji. In each hut & the shrines of the top, the climbers can get the cane branded.

If you arrive at the top of the mountain, I recommend to go "Ohachi-meguri[お鉢（はち）めぐり]"(going around big creator "Dai-naiin[大内院（だいないいん）]" & small crator "Shō-naiin[小内院（しょうないいん）]" of the top.). And on Ohachi-meguri, you can visit the summit "Kengamine[剣ヶ峰（けんがみね）]" of Mt. Fuji(3,776m) that is also the highest place in Japan. There is a meteorological station on the summit. It takes 1.5 hour(about 2.6km) to go around the top. 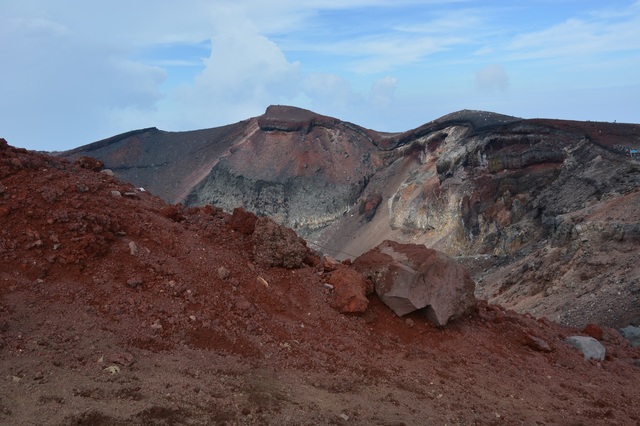 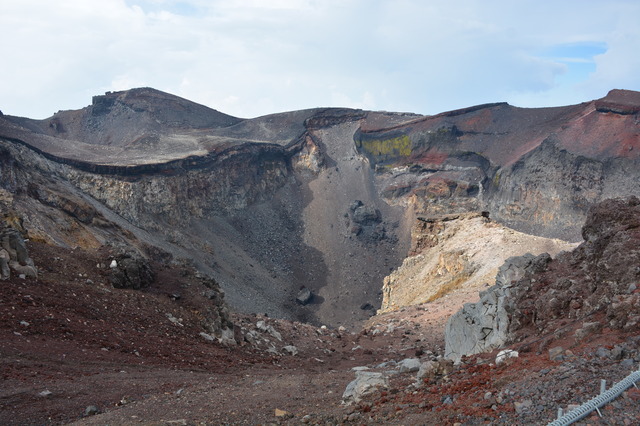 The crater of the top of Mt. Fuji 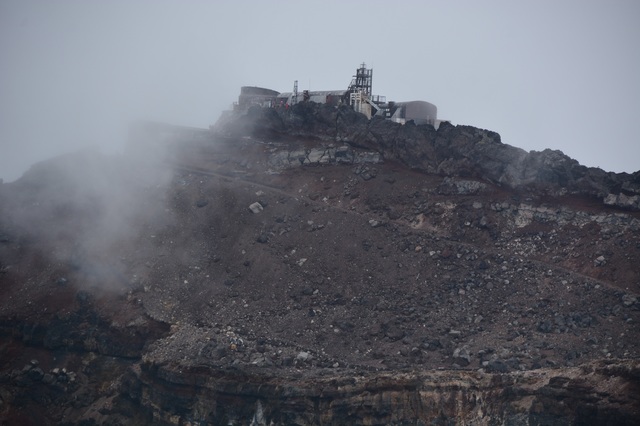 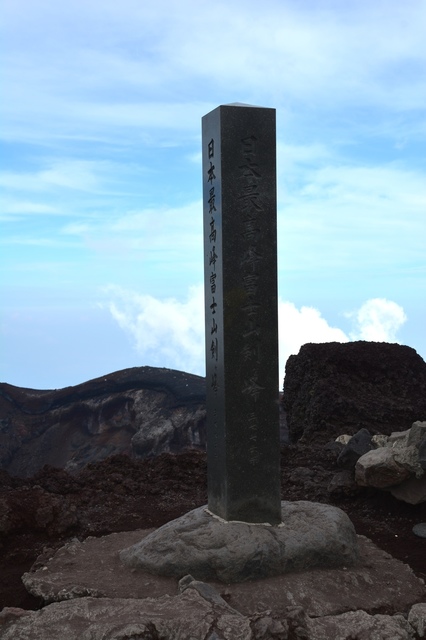 The summit of Mt. Fuji(Kengamine)

And there are two shrines, Fujisan Chōjyō Sengen Taisya Okumiya Shrine & Kusushi Shrine and you can buy charms, amulet or Goshuin[御朱印（ごしゅいん）](sacred stump) that are only sold in these shrines. And you can buy the climbing certificate in the post office of the top. If you want souvenir at the top, there are shops next to Kusushi Shrine. 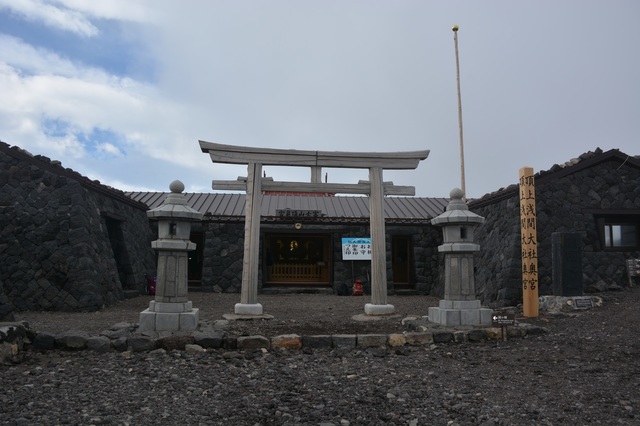 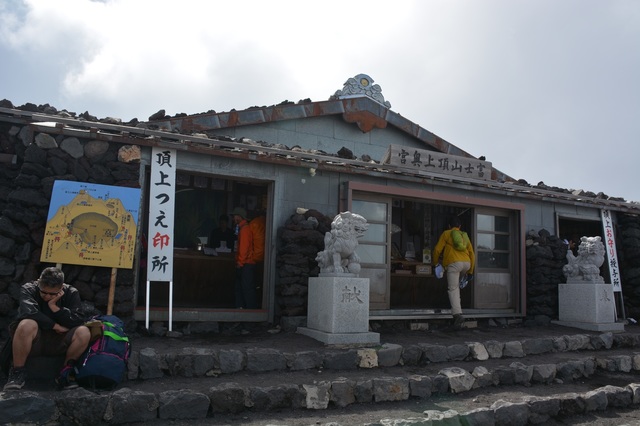 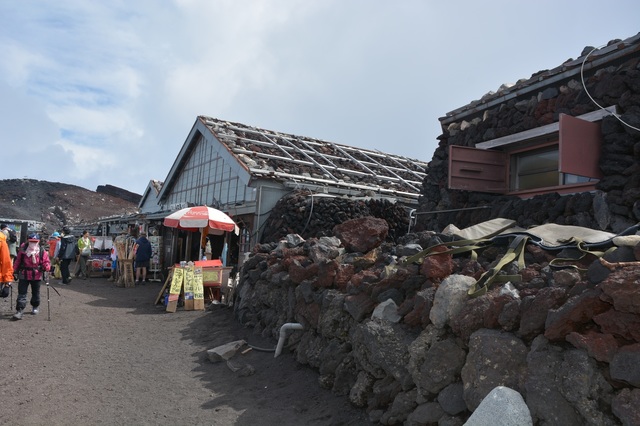 The shops at the top of Yoshida Trail, Mt. Fuji 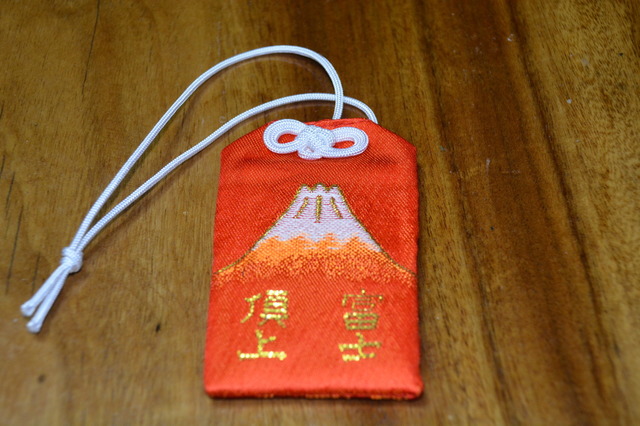 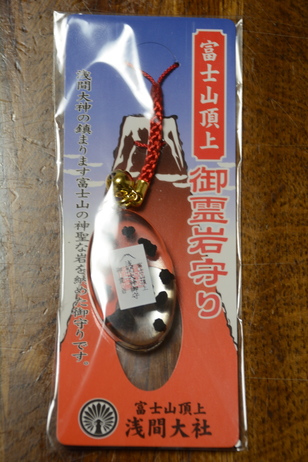 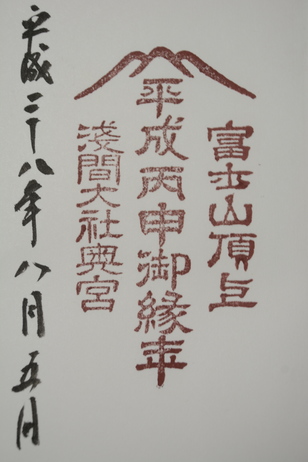 If seeing Goraikō, climbers usually stay at the hut of the top or stay at the hut near the top and start to climb to the top before daylight. Or there is a way called "Dangan-tozan[弾丸登山（だんがんとざん）]". In that, climbers depart the starting point at night and arrive at the top of the mountain before daylight and see Goraikō and after that, climb down without staying. It's very hard way because climbers must walk in the darkness and it need the power to climb without sleeping. But on a clear day, you can see a thousand stars and beautiful night view.